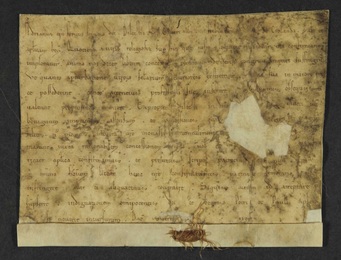 The Domesday book suggests there has been a church in Freiston since pre the Norman conquest. The building of the current church was established by an endowment by the Norman baron Alan de Croun on 7th March 1114, when he gave lands to Crowland Abbey to create a priory. The founding ceremony is well documented and was a great occasion with 5000 people attending the Abbey. During the ceremony, bricks were laid into the wall of the Abbey, with symbolic endowments laid upon them.


Work on building the Priory is likely to have commenced in the later half of the 12th century. We know from documented evidence, by the monk Walter of Coventry, that a great fire in 1157 caused significant damage to the early building work, so much of the current building is likely to be post that date. The only English pope Adrian IV confirmed the bequest in 1154, and the Papal Bull still survives in the Lambeth Palace archives. Alan de Croun is also commemorated jn the great Guthlac roll. This describes the history of Crowland Abbey and is held within the British Museum.


The Priory was Benedictine, hosting between 8 to 12 monks and led by a Prior. They were known as black monks reflecting the colour of their habit. They led a simple life involving work and prayer. Services were held every three hours, and as per the founders bequest they prayed for the souls of his family and King Henry I. Meals were taken in silence and typically of a vegetarian nature. The monks kept a small hospital, located near Spittal Hill. They were also large farmers and traders and were likely involved in building banks to contain the sea. Some monks were involved in more studious work, one wrote an important history of St Thomas Beckitt, another, Nicholas Luff, left Freiston to become the Prior of Mount Grace Priory. At Mount Grace he translated a latin version of the story of Jesus Christ, supposedly written at Freiston, into English. This was one of the first approved translations of the Bible. Luff also led a great convocation against alleged excesses of Benedictine monks, perhaps he experienced some naughty monks at Freiston!


At the Dissolution the priory at Freiston was one of the wealthiest in the UK, as judged by asset value. All that is left of the Priory  now is the nave, which forms the current parish church. We know that there was also a second tower (adjacent to the current east wall), north and south transepts and a large cloister block to the South. The remains are of significant archaeological importance and have not yet been explored in detail.


Within the church, it has very fine examples of Romaneque architecture, including a wonderful arcade of Norman arches. Three outstanding  treasures of the monastic period remain, one of the bells dates from the early 15th century, the roof is magnificent with 17 roof angles and a large number of carved bosses. Finally, the great font cover is late 15th century. This is one of only a handful which have survived in the UK. Originally it was almost completely gilded, a very high status piece. Legend has it that it was carved by an apprentice who was murdered in a fit of jealously by his master. Its survival is incredible, it should have been destroyed during the Reformation (on its pinnacle is a carving of the Virgin Mary). It was painted many times and the Victorians threw it by mistake onto an ash heap, where it was recovered by the then incumbent Canon Staffurth and the parishioner Alexander Sharp.


The church was re-ordered in 1870 by the Victorian architect James Fowler. The works were very intensive and involved removing much of the original floor, as well as, controversially, large numbers of remains. The floor was re laid and a large number of pews were installed. A new pulpit was installed, the south aisle was rebuilt, the heating system was upgraded, the roof repaired and importantly a large window was installed above the Altar in the east wall. This allows a wonderful cascade of light through the building,  a key feature of St James.


The building has been well maintained and loved. it is expensive to run and the PCC recognises that to be sustainable in the future it will have to evolve. The PCC are currently working on an ambitious project to make the building sustainable, and also to leave a legacy after its first 900 years.